Spatulatta is a website where kids teach kids to cook. Our main goals are to foster peer-to-peer learning, healthy eating, and teaching children life skills.

Spatulatta is the work of two little girls and two women. Although Belle and Liv were the on-camera stars, their mother Heidi and neighbor Gaylon were the driving force behind the scenes.

We made a decision early on to allow kids to use real knives and, when they were ready, to use the stove top and the oven so that their confidence would be built and they would acquire skills that would last them a lifetime.

Spatulatta grew with the girls. Liv and Belle started when they were six and eight years old respectively, so that as their confidence grew, the recipes got more complicated. The recipes range from super simple to advanced. For example, a two-year old can make Berry Dip-and-Roll look fabulous. A ten-year old can master the Standing Rib Roast. Parents could choose the skill level of their child and find an appropriate recipe to cook. So a parent that was coming to the website could start with the first couple recipes and move up.

The roots of Spatulatta began in the late 1980’s on the set of  National Geographic shoot for a film introducing the new food pyramid to school kids. The consultants thought that a pizza with vegetables and meat and cheese would be in line with the recommendations of the food pyramid, and would be something a kid might want to eat. The idea was sparked when after the shoot was finished, the young, eight year old actor who had just completed making the pizza turned to Gaylon and said, “I had no idea pizza didn’t come out of a box.” That’s when the light bulb sparked and she realized that kids didn’t know where their food came from. It seems impossible today when 10 year old chefs are competing against professionals on television but that was a time when the market was still being dominated by fast food and convenience food for children.

The writing style of Spatulatta was designed for latch-key kids. So while writing recipes, Gaylon went to great lengths to make sure a child working alone could figure out what to do. Additionally, Gaylon wanted to counter the culture of childrens cookbooks utilizing sweets and junk food to appeal to their audience by using healthy and family friendly recipes.

Spatulatta turned 12 years old the other day. And while Belle and Liv are off at college our mission stays the same. 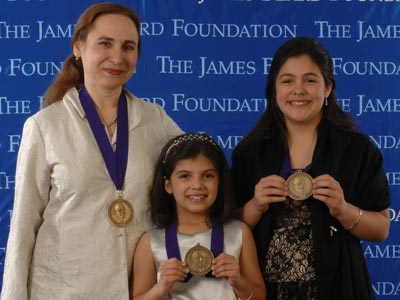 Spatulatta was on the cutting edge of video streaming for the web and in 2007, we applied to be considered for the James Beard Award. For all of you who aren’t foodies yet, the Beard Award is the equivalent of the Academy Award for chefs and food writers.

And amazingly we were nominated for Best Webcast! We went to New York thinking just being at the James Beard Award ceremony would be a great achievement for a two kids and a couple of home cooks.

Imagine our delight when the name Spatulatta was called! We were over the moon.